During a severe thunderstorm in Wittenberg, Wisconsin, straight line wind gusts of 70 to 80 miles per hour damaged the Wittenberg-Birnamwood High School main facility, despite no reports of an actual tornado touchdown. Fortunately, their adjacent aquatic center remained untouched.

The Calm (And Prep) Before the Storm

The existing roof for the school’s main facility featured a contractor fabricated fascia system. In 1998, the school built an adjoining facility, what was to become the Darwin E. Smith Community Aquatic Center, and selected Metal-Era’s Anchor-Tite standard fascia as their roof edge. 744 total feet of the extruded, snap-on fascia were installed.

When the summer storm arrived with powerful wind gusts, the Aquatic Center was able to withstand the storm’s punishment. The main facility wasn’t as fortunate. The main high school facility received significant damage as the adhered EPDM roof blew off when the fascia and gutter began to fail. In the end, the storm claimed the entire roof system, all the fascia, and gutter. As a result, storm water ruined the gym floor, the commons area and auditorium, as well as many computers.

Maurer Roofing Company was immediately awarded a contract to provide repairs to the roof, which included a complete reroofing. Repairs to the interior were still in progress once school started. This caused a number of challenges for the staff, teachers, and students such as increased noise level and finding alternate locations for gym classes and volleyball matches. The total cost of repairs and replacement of not only the building’s roof system, but its interior and the assorted collateral damage, was quite substantial for this small school district.

An Explanation for Different Results

Luckily, the damage was confined to only the high school building. The Anchor-Tite standard fascia on the adjoining Aquatic Center did not fail and was able to keep the entire roof secure. So, what caused one fascia system to succeed where the other one failed?

There may be a variety of factors at play, however, using RICOWI (Roofing Industry Committee on Weather Related Issues) research, they have found that, “Since 2003 the International Building Code (IBC) has required that edge metal be designed and installed in accordance with ANSI/SPRI/ES-1. Compliance with the standard could significantly reduce the wind damage.” Anchor-Tite standard fascia, like all of Metal-Era’s roof edge systems, is ANSI/SPRI ES-1 tested to a design pressure of 290 psf. This performance standard is widely recognized throughout the industry as a way to ensure a quality roof edge. It also features the industry’s most comprehensive warranty coverage with a Lifetime, 215 MPH Wind Warranty.

How We Did It 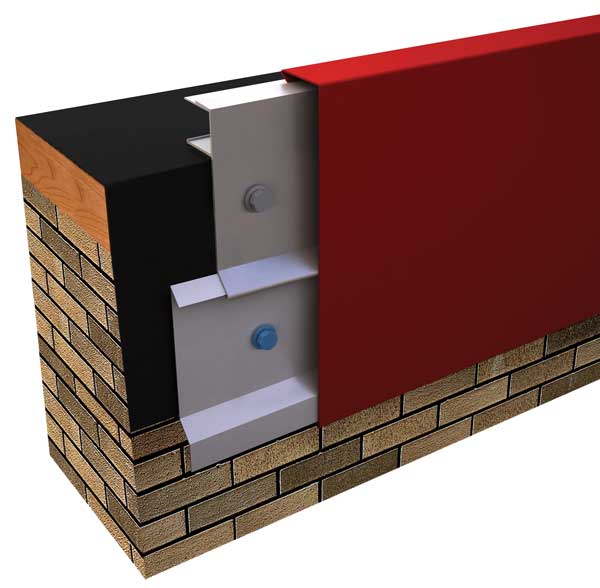